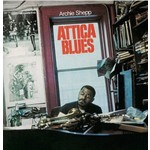 A powerful mix of psychedelic soul & jazz that retains Shepp's political sentiment of his earlier works. 'Attic Blues' is a huge funk-soul composition, referring to a mass shooting of inmates at Attica Prison. Henry Hull's vocal sits on top of bass, layered percussion, wah-wah guitars, plus large horn and string sections to create a massive sound.

A. Attica Blues
B. Quiet Dawn