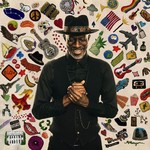 Keb' Mo' releases Oklahoma, his first solo studio album since BLUESAmericana (2014). Building on the backbone of the Blues with subjects like depression and love, Mo' also addresses current worldly issues like immigration and environmental degradation.

Overall, Oklahoma-which Keb' has dedicated to his late mother, Lauvella Cole, who passed away in September 2018 at the age of 91-maintains an impressive level of emotional engagement throughout, making it one of his most compelling collections. With noted musical veteran Colin Linden (The Band, Bruce Cockburn) heading up production duties, the album's 10 tracks encompass Keb' Mo's diverse talents, with the artist delivering some of the most adventurous and personal work of his career. Oklahoma (Concord Records) features cameos from Taj Mahal, Rosanne Cash, Robert Randolph, Jaci Velasquez and Keb' Mo's wife, Robbie Brooks Moore.

SIDE A:
I Remember You
Oklahoma
Put A Woman In Charge
This Is My Home
Don't Throw It Away

SIDE B:
The Way I
Ridin' On A Train
I Should've
Cold Outside
Beautiful Music