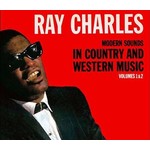 The groundbreaking albums, Modern Sounds in Country and Western Music, Vols. 1 & 2 are now reissued on CD.

Modern Sounds in Country and Western Music Vol.1 became an instant classic when it was first released in 1962. The album's integration of soul and country music bent racial barriers in popular music, amid the height of the Civil Rights Movement. In the process of recording the album, Charles became one of the first African-American musicians to exercise complete artistic control over his own recording career. The album spawned four chart topping singles, "Born to Lose", "Careless Love", "You Don't Know Me", and "I Can't Stop Loving You", the latter (and the album itself) being RIAA-certified Gold in only a month.

The success led to the recording of Modern Sounds in Country and Western Music, Vol. 2. Focusing more on balladry, one side featured performances by the Ray Charles Big Band with the Raelettes, and the other with a string section and the Jack Halloran Singers. Like its predecessor, it was released to both critical and commercial acclaim. Both albums have been regarded by many critics as Ray Charles's best studio albums, with Vol. 1 being inducted into the GRAMMY Hall of Fame for "historical significance".