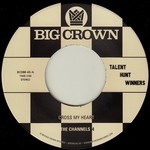 Big Crown Records is proud to present, for the first time ever on a 45, two tunes pulled from one of Brooklyn's most sought after "Holy Grail" soul records, YIA Talent Hunt Winners.

Youth in Action, Inc. (YIA) was formed in 1963 when the Central Brooklyn Coordinating Council received a grant to develop a youth services program in the Bedford-Stuyvesant community. At one point they threw a local talent show and the winners of the talent show were invited into the studio to record some of their tunes. The Talent Show Winners album is the top five amateur vocal groups backed by a local band known as The Thrillers Band, recorded sometime around 1968.

The A Side is The Channels 4 cover of the Billy Stewart classic "Cross My Heart". There's an unduplicatable charm on these recordings coming from the lo-fi studio set up of the time, the fervor that the youths on these records are performing, and the pumped in audience applause they went with to make it seem like the recordings were from the actual talent show. This is lo-fi gold.

The B Side is Carla & The Carlettes killer cover of The Rascals "Groovin". The take the popular tune of the time which came out of the borough of Queens and give it a proper Kings county soul treatment. Again, this is lo-fi gold.

A. The Channels 4 - Cross My Heart
B1. The Carlettes - Groovin