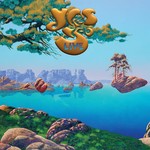 Yes 50 Live was recorded on the US leg of their 50th anniversary tour with most of the album coming from two dates at The Fillmore in Philadelphia on July 20th and 21st 2018.

The live performances on Yes 50 Live seamlessly weave together several eras from the band's past with songs from 10 different studio albums recorded between 1970 and 2011. Naturally, the collection highlights some of the group's most important music, including "Starship Trooper," from The Yes Album (1971), "Roundabout" from Fragile (1971) and the title track from Close to the Edge (1972). But the new live album also highlights some of Yes' most adventurous work with an excerpt from "The Ancient," a track that appeared on 1973's Tales From Topographic Oceans, and "Soon," which is the final section in "The Gates Of Delirium" from 1974's Relayer.

[CD2]
1. Parallels
2. Excerpt From The Ancient
3. Yours Is No Disgrace
4. Excerpt From Georgia's Song And Mood For A Day
5. Roundabout
6. Starship Trooper / Life Seeker / Disillusion / Wurm