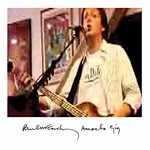 Live In Los Angeles was a covermount CD for The Mail On Sunday newspaper in Britain and Ireland, on 17th January 2010. It had been recorded during Paul's unannounced performance at Amoeba Music in Los Angeles on 27th June 2007: a free show, inside the mammoth Hollywood record store. In the audience, small children and grandparents rubbed elbows with the likes of Ringo Starr and Woody Harrelson. All tracks performed by Paul McCartney, Rusty Anderson, Abe Laboriel Jr, Brian Ray, David Arch. Recorded at Amoeba Music, Hollywood on 27th June 2007.