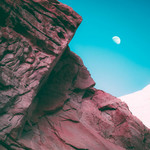 Bonobo returns with new single 'Linked'. The dance floor-ready new release from the LA-based producer (aka Simon Green) is an atmospheric slow-builder, perfectly tuned for festivals this summer. It follows his compiling of the inaugural "fabric Presents" compilation, which featured a new song 'Ibrik' (picked as Annie Mac's Hottest Record in the World on BBC Radio 1), and comes after the career-defining 2017 album Migration, which reached the UK Top 5, received two GRAMMY nominations and saw him headline festivals and sell out multiple global tours with an expanded live show.