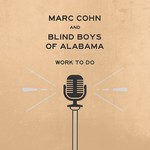 Marc Cohn & Blind Boys Of Alabama
Work To Do

Work to Do is comprised of three studio tracks by Cohn and the Blind Boys (two originals, including the title track, and a version of the gospel standard "Walk In Jerusalem") plus seven intimate live performances recorded at the Katharine Hepburn Cultural Arts Center in Old Saybrook, CT, during a taping of the PBS series The Kate.

The live performances on Work to Do feature the Grammy award-winning Blind Boys of Alabama adding their trademark harmonies and vocal textures to six songs drawn from the breadth of Cohn's venerable career, including the mega-hit "Walking in Memphis," "Ghost Train" and "Silver Thunderbird". The Blind Boys' striking rearrangement of the traditional hymn "Amazing Grace", to the tune of "House of the Rising Sun", completes the collection.

Hailed as "gospel titans" by Rolling Stone, the Blind Boys first rose to fame in the segregated south with their thrilling vocal harmonies and roof-raising live show. They released their debut single on the iconic Veejay label in 1948, launching a 70-year recording career that would see them rack up five Grammy Awards (plus one for Lifetime Achievement), enter the Gospel Music Hall of Fame, collaborate with everyone from Mavis Staples and Stevie Wonder to Prince and Lou Reed, and perform on the world's most prestigious stages.