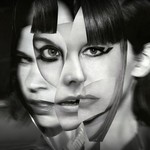 The Center Won't Hold is Sleater-Kinney's midnight record on the doomsday clock. After twenty-five years of legendary collaboration, rock'n'roll giants Carrie Brownstein, Corin Tucker, and Janet Weiss rise to meet the moment by digging deeper and sounding bigger than we've heard them yet.

Third single 'The Center Won't Hold' follows the release of 'Hurry On Home' and 'The Future Is Here', which were both received with wide critical acclaim, and described as "mesmerizing" (Consequence of Sound), "a work of sardonic feminism" (Stereogum), a "knockout" (Pitchfork), and "glorious" (Vogue).

This 10th studio album from Sleater-Kinney was produced by St. Vincent.