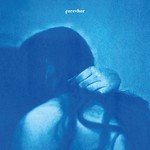 Written primarily about Shura's relationship with her girlfriend and their long-distance conception, forevher covers everything from the initial pull of desire to recognizing the moment when the connection develops into something scarily meaningful: it's a classic NYC-to-London love-story, but one told through the totally modern filter of dating apps, unanswered texts, and Skype chats.

On her 2016 debut, Nothing's Real, the half-Russian singer, songwriter and producer became an accidental ambassador for the lonesome and rejected. Its themes of anxiety, unrequited romance and the outsider were articulated in fantastical bedroom-pop, which earned Shura an impassioned global fanbase. Unsurprisingly, if you'd have told her just a few years ago that she'd make a follow-up exploring "all that love is" few would have been as surprised as herself. And whilst how to live - and love - as a queer woman has always been integral to Shura, it's remarkable to hear the timeless stories of forevher twisted into new sonic fabric: this time around, the inspiration of Joni Mitchell, The Internet, Prince and Minnie Riperton formed the basis of a record that (despite its universal theme) still in many ways runs counter to the dominant cultural narratives.