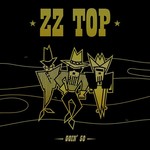 Packed with enough hits to fill a roadhouse jukebox, GOIN' 50 spans the band's entire musical career, from its 1969 debut, and its multi-platinum zenith during the Eighties, to its most-recent releases. This new retrospective includes an array from each of the 15 studio albums that guitarist Billy Gibbons, drummer Frank Beard and bassist Dusty Hill have recorded since 1970. Two bonus tracks, "Salt Lick" and "Miller's Farm" - a single and b-side respectively - were recorded in 1969 by the original incarnation of ZZ Top.