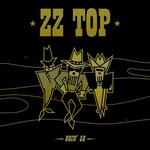 Packed with enough hits to fill a roadhouse jukebox, Goin' 50 spans the band's entire musical career, from its 1969 debut, and its multi-platinum zenith during the Eighties, to its most-recent releases.

The first disc of Goin' 50 focuses on the irresistible FM-radio hits that hooked the first generation of ZZ Top fans during the Seventies and early-Eighties with songs like 'La Grange', 'Tush', 'Cheap Sunglasses', 'I'm Bad, I'm Nationwide', and 'Pearl Necklace'.

The additional disc explores the steady stream of hits the band released between 1983 and 1991 that made them international superstars, including six Top 40 tracks: 'Gimme All Your Lovin'', 'Legs', 'Sleeping Bag', 'Stages', 'Rough Boy', and 'Velcro Fly'.

Goin' 50 closes with a selection of songs recorded between 1992 and 2016 that find the band returning to its blues roots for fresh inspiration on tracks like 'Pincushion', 'What's Up With That', 'Rhythmeen', and 'I Gotsta Get Paid'. The set's final two tracks - live versions of 'Waitin' For The Bus' and 'Jesus Just Left Chicago' - are taken from the band's most recent release, Live Greatest Hits from Around the World (2016).