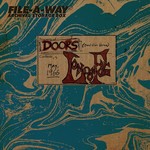 A break-out release edition of the limited-edition deluxe London Fog 1966 box of 2016.

Before The Doors took the music scene by a storm in 1967, they were the house band at the London Fog, a Sunset Strip dive bar located just footsteps away from the world famous Whisky a Go Go, the future home of many of the band's most legendary performances.

Noted Doors engineer Bruce Botnick recently mastered the audio for London Fog 1966. The show was recorded by Nettie Peña, an audience member who captured the audio on a ¼" reel to reel recorder, which was the property of the Los Angeles Unified School District. Her father was a teacher for LAUSD and let her borrow the recorder to take to the show.

The show featured on London Fog 1966 took place the same year that The Doors recorded their eponymous debut. Released in January 1967, the album would become one of the most influential in rock history. Like many of the band's early concerts, the show captured on this deluxe set reflects the group's deep love for the blues with covers of standards like Muddy Waters' Rock Me and I'm Your Hoochie Coochie Man. The set also includes raw performances of Baby, Please Don't Go (Big Joe Williams), Don't Fight It (Wilson Pickett), and Lucille (Little Richard).