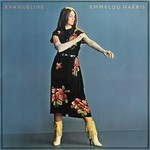 Evangeline was originally released in 1981.

Songs included a remake of "Mister Sandman" (from the Triosessions with Dolly Parton and Linda Ronstadt), "Evangeline" (also featuring vocals by Parton and Ronstadt), which she had previously performed with The Band, Rodney Crowell's "Ashes By Now", and a cover of John Fogerty's "Bad Moon Rising".

It was certified Gold in less than a year after its release.