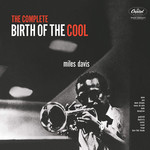 Miles Davis
The Complete Birth Of The Cool (LP)

Miles Davis' Complete Birth Of The Cool recordings are being released on vinyl for the first time, in a new 70th anniversary edition, via Blue Note / UMe. Davis' seminal Birth Of The Cool was recorded in 1949-1950, with a group including Gerry Mulligan, Lee Konitz, Max Roach, John Lewis and arranger Gil Evans; the album was released in 1957. Though Complete Birth Of The Cool, which includes a remastered version of Birth of Cool alongside live session recordings from 1949-1950, was released digitally in 1999, this marks its first vinyl release. The new edition includes a retrospective by jazz historian Ashley Kahn, was well as liner notes by Mulligan and writer Phil Schaap.

SIDE C
1. Birth Of The Cool Theme
2. Symphony Sid Annouces The Band
3. Move
4. Why Do I Love You
5. Godchild
6. Symphony Sid Introduction