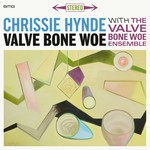 The amazing Chrissie Hynde displays yet another volte face in her incredible career with the release of her new album 'Valve Bone Woe', a collection of mostly jazz tunes.

'Valve Bone Woe' was produced by Marius De Vries and Eldad Guetta and recorded with the Valve Bone Woe Ensemble at Air Studios in London.

"I'm not hugely interested in branching out into other musical genres, being a devout rock singer as such, but jazz is something I grew up around (thanks to my bro) and I've always had a soft spot for it. I often bemoan what I regard as a decline in melody in popular music and I wanted to sing melodies.

Plus, I have a penchant for cover songs, it's the surprise of singing something that I didn't think of writing myself that turns me on. Jazz got side-lined by Rock & Roll in the 60's, but now the demise of rock seems to be heralding in a newfound interest in it, the most creative and innovative musical forms of the 20th century. I'm happy to jump on the bandwagon." - Chrissie Hynde

"Valve Bone Woe is a lovingly crafted collection of covers - a surprising, successful new endeavour by an artist evidently still keen to challenge herself." - The Independent

"The vibe is appealing and so is Hynde's performance. Unhurried and nuanced, she eases herself into songs she clearly loves, and that sense of warmth lingers long after the album's last notes fade away." - All Music