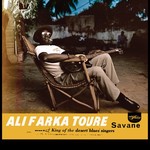 'Savane' is the last solo album by the legendary Malian blues pioneer Ali Farka Touré. Recorded in Bamako with his specially assembled down-home ngoni group, 'Savane' is Ali's testament, a powerful reaffirmation of his umbilical link to his Malian musical roots.

Acclaimed as his finest album, 'Savane' is both one of the most traditional and seemingly the most blues-drenched of Ali's recordings. The record occupied Ali right into his last weeks, and he finally declared himself satisfied with it shortly before his death in March 2006.