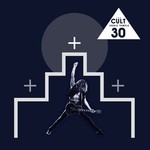 Now cut onto two pieces of black vinyl, the audio is improved and contains 16 tracks total, which comprise the original album plus 6 B-sides. It's been out of print for over 20 years.