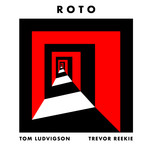 The Roto sessions took place on Sundays, a creative routine Ludvigson & Reekie (Trip To The Moon) have been observing for over 20 years. Roto is their 7th album together.

The album is a collection of live Electro-Acoustic-Ambient improvisations - no overdubs - recorded direct to digital 2-track. Electronica keys, Vocoder and piano on one track, guitar (just a looper & delay) on the other, and no guests involved.

It makes for heading off towards an unknown destination liberating. As Miles Davis said: "I'll play it first and tell you what it's called later". Ornette Coleman put his own spin on it when he declared "the sound is the freedom - the chord doesn't mean a thing".

For Ludvigson and Reekie, it was a case of capturing a vibe and just going with it. Where one ends up often takes the music to unscheduled destinations...

In the past the pair have released albums as Trip to the Moon, with other well-known New Zealand jazz musicians Greg Johnson on trumpet, Jim Langabeer on woodwinds and Nigel Gavin on glissentar.

"The duo at the core of Trip to the Moon here embark on more uncharted territories with Tom Ludvigson on piano and synths, Trevor Reekie on guitar, e-bow and various effects for half a dozen pieces improvised in the studio and recorded on the spot without resorting to overdubs.

While we may not know how many other similarly spontaneous pieces failed to make the final cut for whatever reason, these spacious, quasi-ambient, innovative and sometimes ethereal tracks roam between downright gorgeous, weightless space-ambience (the still slightly disconcerting Fantasy Garden) to challenging passages from Reekie which hint at the Frippertronics/Fred Frith prepared guitar axis.

From bubbling electro-prog (the opening synth passages of Ghost at the Crossing which resolves into some gravity-free guitar) through elegiac piano passages and beyond, this seemingly modest project stakes out a lot of ground and distills a considerable number of ideas past and present into soundscapes for the imagination." - Graham Reid, elsewhere