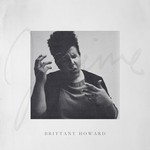 Brittany Howard has stepped away from her award winning band Alabama Shakes to record her most ambitious recording ever, full of synthed-out psychedelic funk, druggy soul ballads, hip-hop loops, and lyrics grappling with her past, including sexuality, family tragedy, religious guilt and more.

"The album, Jaime, is named after her sister, who died of cancer when they were both teenagers. "The title is in memoriam," says Howard in a press release announcing the record. "And she definitely did shape me as a human being. But the record is not about her. It's about me. I'm pretty candid about myself and who I am and what I believe. Which is why I needed to do it on my own."

Jaime's first single is a swirling, punch-drunk and funk rumination on the ways repeated mistakes can hold us back. "I just don't want to be back in this place again," she sings. "I mean, I done cried a little / Tried a little / Failed a little."

Howard says this is the most honest and personal she's been in her music but felt it was time to do something on her own, outside of Alabama Shakes. "I turned 30 and I was like, 'What do I want the rest of my life to look like?' Do I want to play the same songs until I'm 50 and then retire, or do I do something that's scarier for me? Do I want people to understand me and know me, do I want to tell them my story? I'm very private, but my favorite work is when people are being honest and really doing themselves."" - NPR