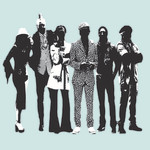 Since 1993, Brooklyn Funk Essentials have been presenting their unique brand of eclectic funk to ecstatic audiences around the world. Made up of musicians, singers and poets from around the globe, the group is an all-star-team famously mixing styles like soul, jazz, latin and house - all rolled into one ferocious funk fest. If it grooves, they will funk it!

Recording of 'Stay Good' began in 2018 in Stockholm, Sweden and Birmingham.

On 'Stay Good', the band chose to work in the studio as they do on stage - as a tight-knit six-piece band, and keeping guest appearances to a minimum, with the exception of vibraphone wizard Roy Ayers appearing on the slow jam 'Breeze On Me'. Other tracks include the Frankie Knuckles co-write 'Watcha Want From Me', the space-funk of 'Funk Ain't Ova' and a dub-jazz version of Joe Henderson's 'Y Todavìa La Quiero'.