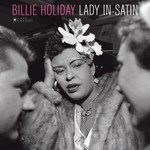 "Lady in Satin" (Columbia CS 8048) marked Billie Holiday's last big hit and her second to last album ever. It represents something close to her swan song. Although some live recordings made after the Columbia LP exist, and she even made a second album with Ray Ellis for MGM, none of these documents were as enduring as Lady in Satin. In fact, Billie herself loved this LP, on which she fully impregnates the music with her soul, even though the effects of a lifetime of drug abuse and alcoholism are apparent in her voice. Most jazz fans now consider "Lady in Satin" to be Holiday's last great effort. By early 1959 she had cirrhosis of the liver. She stopped drinking on doctor's orders, but soon relapsed. On May 31, 1959, she was taken to Metropolitan Hospital in New York for treatment of liver and heart disease. She died on July 17, 1959 at the age of 44.