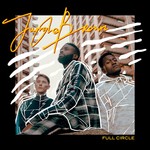 With a three-single campaign of Keep It Movin', Ikoja and culminating with We On -featuring the legendary Sampa The Great - we knew Jungle Brown's sophomore effort would be one of the highlights of the year. Quite frankly, as soon as we heard the relaxed Jurassic 5 vibes of debut single and album opener Keep Movin', we knew Full Circle would be a firm favourite.

Don't take our words for it though: listen to the words of UK hip hop heavyweight Loyle Carner, who simply said "Keep It Movin' is my jam!". As an entire coherent piece, Full Circle lives up to its incredible singles and requires careful dissection to find even one flaw.

Jungle Brown are UK hip-hop - and thank fuck for that, as they recognise the greatness of the genre in a time when every producer is trying to find the next Stormzy or regurgitating the over the pond vibes of bitches and hoes. Jungle Brown stand proud of both who they are and their heritage; it's because of this that they have comfortably produced one of the albums of the year, let alone one of the UK hip-hop albums of the year.

Jungle Brown are no different to hip-hop groups before them, boasting a host of guests throughout the album; the first chronologically being Fliptrix on Wicked, which is the polar opposite to opener Keep It Movin' - which although possessing a far harder edge, falls comfortably among the collection of tracks.

Second single and third track on the album Ikoja sums up the album as a whole in one track: it's part soulful, part dance, part edgy and all chill. The triumph in Full Circle is that it addresses, as best possible, every listeners' taste. Recently instant megastar Billie Ellish was interviewed by Jimmy Fallon where she spoke of trying to write an album that would have at least one track for everyone; Jungle Brown may not have planned this, but this is what they've achieved. They move and develop through the album to create near perfection; not every track will be to everyone's taste, but no track is worth skipping. The band have carefully orchestrated the amazing album as it's own entity.

Sometimes shows that, 5 tracks in, Jungle Brown will keep reinventing; Sometimes is designed to be big booty beats for filling dancefloors, and have no doubt: the dancefloors will fill. Every guest on the album compliments the track they feature on, but Ruby's guest vocal brings a quality that three lads just wouldn't be able to.

Purists have forever questioned how many guests a rap group can have on an album before it simply becomes a compilation. In Jungle Brown's case, the album features 4 tracks that prove the trio can hold their own without extras.

The band open the album with stand out track Keep It Movin', which hones the laid-back b-ball vibes, and then later has a cluster of three, starting with Drake influenced Wayside, rolling into reflective eye opener Time Ticks, and finally the romantic - and lustfully vibed - U&I.

Being able to get a guest with as much weight as Sampa the Great to feature on your track made it a logical choice to drop We On as the final single. The reality though is that because the album is so strong, it fails to be a stand out track; it merely finds its place among the other greats. We On is the musical fight between Sunday chills and ‪Saturday night‬ vibes, and in it both are victorious.

Full Circle packs a vicious punch right up to the very last note, with the sax dappling on closer Custom Made cementing the album as a cut about the rest. Full Circle never fails to surprise you as a listener; in a culture full of sales pitch or record label funded playlists, Jungle Brown prove that hip-hop can have guests whilst still feeling authentic. Full Circle undoubtedly proves that the art of the album is still very much alive.
9 / 10 Underscorepart3