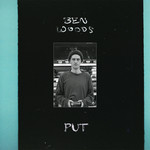 With the release of his debut album PUT, Ben Woods establishes himself as the poster boy of a new, more personal phase of the 'Antipodean Gothic': a term, penned by the writer Jasmine Gallagher, which describes the dark output spilling from outsider musicians in Christchurch in the mid-2010s. To other New Zealanders, Christchurch seems to be a desolate, xenophobic, flat city, which in the wake of a series of natural disasters is being sparsely put back together by a bunch of brutal development moguls. It's also a city with a thriving indie rock scene, unspoiled by commercial interests and held together by bands all drawing from the same small pool of members and venues. Christchurch has a rare grit. Ben paid for PUT by pulling pints in Lyttelton bars and through the shortterm loan of his body for drug research trials. It is, in spite of its gothic upbringing, something of a pop record that has been boiled through indie rock influences. He has described the song-writing process for the album as 'spontaneous', and this mood can be felt throughout the record. The Tall Dwarfs-esque energy of LOZENGE is contrasted by the songs INDULGE and GOOD 2 BE SLEEPING, which feel more akin to late era Smog, Sparklehorse and other nineties slowcore greats. It was recorded at Dunedin's Radio One with Steven John Marr (Kane Strang, Doprah), during a biting cold winter week in 2018. LOZENGE and ROMANCY, the singles already released, show off both extremes of PUT. The former is dizzy, bubblegum punk, and evokes the fever that comes with a love-hate homesickness. ROMANCY is a meditative, long-winded rumination on the befogged states we enter under the influence of new and uncertain affections. Deeper into the record, the listener will find more attempts to understand and respond to new and old love (MARCHY, INDULGE, PIRATE), bewildered responses to the harshness and pace of being alive (LESSON, PRAISE) and ventures into the subconscious as a remedy to one's own sense of alienation (GOOD 2 BE SLEEPING, ANTIQUE).