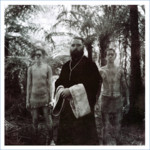 Holy Colony Burning Acres is a record that focuses on major issues facing indigenous peoples all around the world - from crying for the injustices of West Papua in Bird of Paradise to lamenting courage in Truganini, a song about the last full blooded Tasmanian aboriginal.

This form of politically charged reggae has barely been heard since the days of Herbs and their fight against nuclear power in the Pacific.

"From the short opening karanga/address of The Tower of Babel (a sound collage with multiple voices cutting across each other) to the simple acoustic ballad Truganini at the end, this is impressive on every level." - Elsewhere