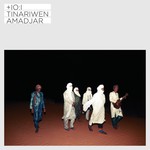 This nomadic album, recorded in a natural setting, is as close as you can get to the 'soul' of Tinariwen, a group of musicians that in every sense exist far-beyond their 17-year tenure and extensive discography of critically acclaimed albums.

Lyrically and thematically, the album explores the continuing political, social, humanitarian and environmental problems faced in their home country of Mali and continues Tinariwen's pursuit to highlight the plight and issues of their people through their music.

The album is an eloquent and moving work, specifically highlighting the on-going obstacles faced by their own Tuareg community as a consequence of everything from the collapse of infrastructure and public services, through to climate change and the ongoing political and military conflict that has dogged the country since it gained independence in 1960.

Shepherd In A Sheepskin Vest