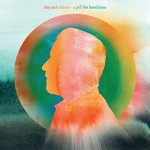 City & Colour
A Pill For Loneliness

Over the course of five studio albums, Dallas Green has compiled a canon ripe with songs amassing a legion of fans worldwide. With this 6th full-length album, Green siphons serenity from stress through a kaleidoscope of lush guitars, ethereal orchestration, and heavenly delivery over eleven tracks that illuminate an entrancing emotional expanse, balancing two extremes with eloquence and energy.