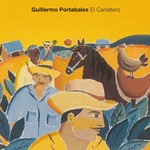 Guillermo Portabales (1911-1970) was a unique performer of the Cuban guajira rhythm, whose influence and popularity has reached far beyond his native Cuba to North & South America and West Africa.

This collection of his classic 60s recordings was compiled by Nick Gold specifically for release on World Circuit in 1996. It has now been remastered specially for this release.