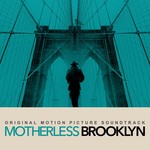 Thom Yorke & Flea, Wynton Marsalis and Daniel Pemberton are some of the musical heavyweights whose music is featured on the soundtrack to "Motherless Brooklyn".

Edward Norton directed, wrote, produced and stars in Motherless Brooklyn. Norton aimed to transpose Jonathan Lethem's contemporary characters into a different period and plot and give it a distinctive atmosphere by re-setting the drama in the 1950s.