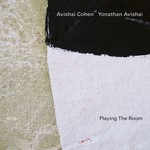 Playing The Room bears testimony to the long musical friendship of Avishai Cohen and Yonathan Avishai. They began to explore jazz as teenagers in Tel Aviv, and have continued to play together over many years, with Yonathan making important contributions to Avishai's group albums Into The Silence and Cross My Palm With Silver on ECM. Their first duo album begins with music composed by the trumpeter and by the pianist and concludes with a touching interpretation of Israeli composer Alexander Argov's cradle song "Shir Eres". Along the way, Avishai and Yonathan improvise - freely, playfully, soulfully - on themes from jazz tradition. And, as the album titles implies, they also invite the recording space, the Auditorio Stelio Molo RSI in Lugano, to be part of the sound, making full use of its resonant acoustic properties in a performance with the intimacy and focus of chamber music. Recorded in September 2018, and produced by Manfred Eicher.