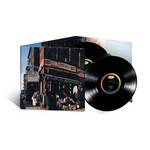 Such was the power of Licensed to Ill that everybody, from fans to critics, thought that not only could the Beastie Boys not top the record, but that they were destined to be a one-shot wonder. These feelings were only amplified by their messy, litigious departure from Def Jam and their flight from their beloved New York to Los Angeles, since it appeared that the Beasties had completely lost the plot.

Many critics in fact thought that Paul's Boutique was a muddled mess upon its summer release in 1989, but that's the nature of the record -- it's so dense, it's bewildering at first, revealing its considerable charms with each play. To put it mildly, it's a considerable change from the hard rock of Licensed to Ill, shifting to layers of samples and beats so intertwined they move beyond psychedelic; it's a painting with sound. Paul's Boutique is a record that only could have been made in a specific time and place.

Like the Rolling Stones in 1972, the Beastie Boys were in exile and pining for their home, so they made a love letter to downtown New York -- which they could not have done without the Dust Brothers, a Los Angeles-based production duo who helped redefine what sampling could be with this record. Sadly, after Paul's Boutique sampling on the level of what's heard here would disappear; due to a series of lawsuits, most notably Gilbert O'Sullivan's suit against Biz Markie, the entire enterprise too cost-prohibitive and risky to perform on such a grand scale. Which is really a shame, because if ever a record could be used as incontrovertible proof that sampling is its own art form, it's Paul's Boutique. Snatches of familiar music are scattered throughout the record -- anything from Curtis Mayfield's "Superfly" and Sly Stone's "Loose Booty" to Loggins & Messina's "Your Mama Don't Dance" and the Ramones' "Suzy Is a Headbanger" -- but never once are they presented in lazy, predictable ways.

The Dust Brothers and Beasties weave a crazy-quilt of samples, beats, loops, and tricks, which creates a hyper-surreal alternate reality -- a romanticized, funhouse reflection of New York where all pop music and culture exist on the same strata, feeding off each other, mocking each other, evolving into a wholly unique record, unlike anything that came before or after. It very well could be that its density is what alienated listeners and critics at the time; there is so much information in the music and words that it can seem impenetrable at first, but upon repeated spins it opens up slowly, assuredly, revealing more every listen.

Musically, few hip-hop records have ever been so rich; it's not just the recontextulations of familiar music via samples, it's the flow of each song and the album as a whole, culminating in the widescreen suite that closes the record. Lyrically, the Beasties have never been better -- not just because their jokes are razor-sharp, but because they construct full-bodied narratives and evocative portraits of characters and places.

Few pop records offer this much to savor, and if Paul's Boutique only made a modest impact upon its initial release, over time its influence could be heard through pop and rap, yet no matter how its influence was felt, it stands alone as a record of stunning vision, maturity, and accomplishment. Plus, it's a hell of a lot of fun, no matter how many times you've heard it.
5 / 5 All Music Guide.

Side A:
To All The Girls
Shake Your Rump
Johnny Ryall
Egg Man

Side B:
High Plains Drifter
The Sounds Of Science
3-Minute Rule
Hey Ladies

Side C:
5-Piece Chicken Dinner
Looking Down The Barrel Of A Gun
Car Thief
What Comes Around
Shadrach