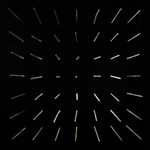 clipping.
There Existed An Addiction To Blood (LP)

Their third album for Sub Pop, There Existed an Addiction to Blood, finds clipping. interpreting another rap splinter sect through their singular lens. This is clipping's transmutation of horrorcore, a purposefully absurdist and creatively significant sub-genre that flourished in the mid-90s. If some of its most notable pioneers included Brotha Lynch Hung and Gravediggaz, it also encompasses seminal works from the Geto Boys, Bone Thugs-N-Harmony, and the near-entirety of classic Memphis cassette tape rap.

The most subversive and experimental rap has often presented itself as an "alternative" to conventional sounds, but Clipping respectfully warp them into new constellations. There Existed an Addiction to Blood absorbs the hyper-violent horror tropes of the Murder Dog era, but reimagines them in a new light: still darkly-tinted and sombre, but in a weirder and more vivid hue.

Clipping's last album, the 2016 afro-futurist dystopian space opus Splendor & Misery was recently named one of Pitchfork's Best Industrial Albums of All-Time. Commissioned for an episode of "This American Life," their 2017 single "The Deep" became the inspiration for a novel of the same name, written by Rivers Solomon and published by Saga Press. But it's their latest masterwork that embodies what the band had been building towards - a work that finds them without peer. This is experimental hip-hop built to bang in a post-apocalyptic club bursting with radiation. It's horrorcore that soaks up past blood and replants it into a different organism, undead but dangerously alive. It is a new sun, blindingly bright and built to burn your retinas.