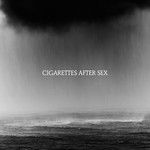 Recorded during night-time sessions in a mansion on the Spanish island of Mallorca, Cry is a lush, cinematic meditation on the many complex facets of love.

While the music came quickly, often improvised on the spot, it would be another two years before Gonzalez would attempt to complete the accompanying lyrics. Helped by the burgeoning love of a new relationship, the influence of films by Éric Rohmer, and the songs of Selena and Shania Twain among others, Cry blends the carnal subtlety of their debut with a warmer palette.

The album was self-produced and engineered by Gonzalez, and mixed by Craig Silvey (Arcade Fire, Yeah Yeah Yeahs).