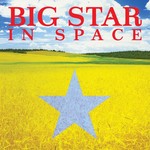 Big Star formed in 1971, and in their brief 4 years together, created 3 albums that consistently make "Best of All-Time" lists. 18 years after officially disbanding, original members Alex Chilton and Jody Stephens joined forces with The Posies' Jon Auer and Ken Stringfellow for a live performance, which led to a tour (documented on Omnivore Recordings' Live In Memphis), and years of concerts. While the live shows were a joy and surprise, a bigger surprise happened in 2005. After over a decade playing together: a new studio album.

The new line up was creating a new chapter for the band while minding and honouring its past. With original vinyl going for outrageous prices, In Space returns as an LP on translucent blue vinyl, and expanded CD with 6 bonus tracks including "Hot Thing" (previously available on the out-of-print Big Star Story) and 5 previously unissued demos and alternate mixes.