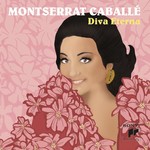 Sony Classical is pleased to release Diva Eterna-a tribute to the late, great Spanish soprano Montserrat Caballé. Diva Eterna features some of Caballé's most significant and versatile works, including works by Rossini, Puccini and Verdi. Popular pieces including Hijo de la Luna by José María Cano, Quiroga's Ojos Verdes and Palabras de Amor by Joan Manuel Serrat are also included in this stunning double CD collection. Montserrat Caballé was born in Barcelona on 12th April 1933. Caballé studied at the prestigious Liceu Conservatory, graduating in 1954. She made her professional debut with the Basel Opera Company in 1956. In 1988, Montserrat Caballé became popular all over the world when she performed the song Barcelona with Queen's lead singer, Freddie Mercury. It was the official song of the Olympic Games in 1992, hitting high on the pop charts across Europe. Caballé has received countless awards and recognitions during her career, including the Prince of Asturias Award for the Arts which she received in 1991.