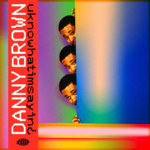 In the nearly ten years since Danny Brown's first album was released, he has permeated both underground and mainstream music culture with an authentic and ever-evolving persona and a sound wholly his own, transcending genres and any parameters the world around him might impose. He set the blueprint for many of today's critical darlings and opened doors for so many following his personally audacious start.

Brown's answer is to make his most focused record yet. A svelte eleven tracks - short when compared to the sprawling opuses of his past - uknowhatimsayin¿ is a more thoughtful affair than anything Brown has previously released. Gone are the tales of all-night benders yammered with cartoonish intensity over beats that sound like an EDM rave in hell. Instead Brown comes off as considered and in control, his flows spun out with poise and eloquence.

The production here suits the changes in Brown's delivery. While Brown has always been a great rapper, uknowhatimsayin¿ will go down as his first hip-hop record. The instrumentals here are laced with the psychedelic potency of Atrocity Exhibition, they also rumble and slap in a manner that recalls classic 90s boom bap. This change in sound is unsurprising when you consider uknowhatimsayin¿'s executive producer - none other than A Tribe Called Quest's Q-Tip, with additional production from Flying Lotus, JPEGMAFIA, Standing on the Corner and Paul White, and guest spots from Blood Orange, JPEGMAFIA, Obongjayar and Run the Jewels.

"There was no room for error. "Q-Tip wanted me to go back to that 'Greatest Rapper Ever' era. I almost had to relearn how to rap again - an ego death type thing. He gave me this whole new outlook on music. I can't go back to how I was before."