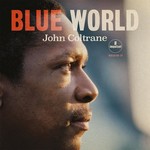 Three weeks after recording his eighth Impulse! album, Crescent - and six months before he would commit to tape his universally-acknowledged magnum opus, A Love Supreme - John Coltrane arrived at 445 Sylvan Avenue, Englewood Cliffs, New Jersey, the location of Van Gelder Studio, to record what was an unusual project for him: music intended to be used in a feature film, and which only now sees the light of day, under the title Blue World.

Coltrane had been asked by groundbreaking cinéma-verité auteur, French-Canadian Gilles Groulx - who was a fan of Coltrane's and knew the saxophonist's bass player Jimmy Garrison - if he would contribute to a movie he was making: a love story with a socio-political subtext set in Montreal called Le Chat Dans Le Sac (aka The Cat In The Bag). To Groulx's surprise, Coltrane agreed to work on the project and, on Wednesday, 24 June 1964, the saxophonist took his quartet comprising pianist McCoy Tyner, bassist Jimmy Garrison and drummer Elvin Jones to record the soundtrack music.

With Groulx in attendance, the saxophonist recorded eight tracks in total, amounting to 37 minutes of music, but only a fraction of the material was used the film, which was critically acclaimed and won the Grand Prix at the 1964 Montreal Film Festival.

The soundtrack, however, was never commercially released at the time, and the master tapes, which remained in the director's possession (and, after his death in 1994, in his family's), were thought lost. Over, 50 years later, the original Rudy Van Gelder-mixed ¼"-inch analogue tape has been remastered by Kevin Reeves at Universal for its first ever release.

What makes Blue World, as it is now known, unique in Coltrane's discography is the fact that it finds the master saxophonist revisiting some of his older tunes in the studio. The reason for this was that Gilles Groulx, who didn't show Coltrane any film footage prior to the recording session, had compiled a list of the music he wanted based on material he was familiar with from the saxophonist's back catalogue.

Blue World shows just how far Coltrane had travelled between 1957 and 1964. He played his old songs differently, and his band, which was evolving as a fine-tuned vehicle for his musical self-expression, put their own stamp on them, taking the material to a different, arguably higher, plane.