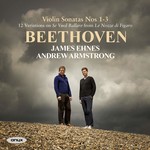 The second volume of the Beethoven Violin Sonata cycle, from James Ehnes and Andrew Armstrong,follows the critically acclaimed release of sonatas nos. 6 &9 'Kreutzer'.

"Ehnes and Armstrong are stunningly responsive in the finale," (op.47) and "ravishing in the slow movement" (op.30/1), said Gramophone of the earlier album, concluding the review by describing it as "a compelling addition to Ehnes and Armstrong's remarkable discography."

This new album contains the three early op.12 sonatas (which Beethoven dedicated to his teacher Antonio Salieri) and ends with the early variations from a theme from Mozart's Marriage of Figaro.