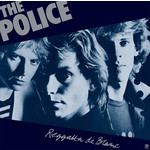 The band's second album and their first album to reach No. 1 in the UK, it features the band's first two no. 1 hit singles - Message in a Bottle and Walking on the Moon (expanding their spacious, dub-reggae sound).

Also features the Grammy-winning instrumental title track, 'new-wave' style rockers - It's Alright for You, Deathwish, No Time This Time and classics - Bring on the Night, The Bed's Too Big Without You and Does Everyone Stare. It also includes one of Stewart Copeland's two lead vocal appearances on a Police album - On Any Other Day.