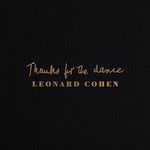 Leonard Cohen
Thanks For The Dance (LP)

In a posthumous new album, Leonard Cohen has robbed death of the last word.

'Thanks for the Dance' is not a commemorative collection of B sides and outtakes, but an unexpected harvest of new songs, exciting and vital, a continuation of the master's final work.
"In composing and arranging the music for his words, we chose his most characteristic musical signatures, in this way keeping him with us," said Adam Cohen. "What moves me most about the album is the startled response of those who have heard it. 'Leonard lives'! they say, one after the other."

'Thanks for the Dance' is an unexpected blessing, a gift of beauty and strength. Leonard Cohen's voice has not been stilled. The dance goes on.