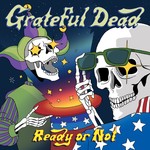 Grateful Dead
Ready Or Not (LP)

The Grateful Dead may have released the band's final studio album - Built to Last - on Halloween 1989, but that didn't stop them from writing new songs for the following years, adding several new tracks to their live repertoire in the early '90s. Sadly, the group was unable to ever complete them in a studio before the death of singer/guitarist Jerry Garcia in 1995.

The world will never know what that album would have sounded like, but we do have a tantalizing idea thanks to a new collection curated by the band's archivist David Lemieux. Ready Or Not features nine unreleased live versions of late-period Grateful Dead songs that debuted in 1992 and 1993. The collection's track list reflects what might have been the band's next official studio album following Built to Last.

Four of the album's nine tracks originally debuted during a two-day period in February 1993, including "Lazy River Road", "Liberty", and "Eternity", a song that Weir wrote with Rob Wasserman and blues legend Willie Dixon. Another was "Days Between". This grand and achingly nostalgic Robert Hunter and Garcia composition closes the album with a version that was recorded in December 1994 at the Oakland-Alameda County Coliseum.