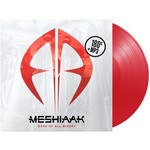 It has been three years since the Australian quartet's debut album 'Alliance of Thieves' dropped, which married dark undertones, heavy grooves and sophistication whilst retaining old-school metal values.

Formed in Melbourne by 4ARM's Danny Camilleri and Teramaze's Dean Wells with bassist Andrew Cameron, they have recruited drummer David Godfrey, who replaces Jon Dette, following his departure due to logistical reasons with him being based in the US and the rest of the band in Australia.

Mask Of All Misery is an album that journey's through a maze of toxic influences and the masks the exponents wear.