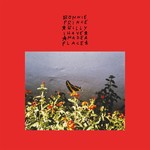 Bonnie "Prince" Billy
I Made A Place (LP)

This time, he brings the lightness with help from a Louisville band including picker Nathan Salsburg, ex-Gary Burton Quartet drummer Mike Hyman and singer-songwriter Joan Shelley.

Influenced by songwriters John Prine and Tom T. Hall and inspired by the state of Hawaii, I Made a Place finds Bonny using his considerable powers for good.