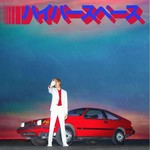 As the title of his brand new 14th album Hyperspace would seem to imply, seven-time Grammy winner Beck has travelled light years from his emergence as a reluctant generational spokesperson when "Loser" exploded from a rejected 1992 demo into a ubiquitous 1994 smash.

In the decades since, Beck's singular career has seen him utilize all manners and eras of music, blurring boundaries and blazing a path into the future while simultaneously foraging through the past.

Unfolding new dimensions in sound, Hyperspace's futuristic spectrum is the result of one of Beck's most collaborative albums to date. Seven of the album's 11 tracks-including single "Uneventful Days" and the previously released "Saw Lightning"-feature cowriting and co-production from Pharrell Williams.