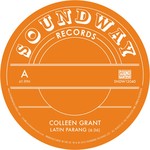 Parang is a style of folk music that originated from Venezuelan and Colombian immigrants that came to the Caribbean, and evolved to include elements of Latin music, disco and soca - as is evident in this release. Although traditionally used to be played during the festive season in Trinidad and Tobago, parang music continues to heat up dancefloors all year round.

These two in-demand tracks were originally released on the local RH Productions label in Trinidad & Tobago.