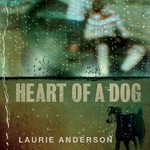 Laurie Anderson
Heart Of A Dog

The complete soundtrack recording of Laurie Anderson's Heart of a Dog.

Anderson was commissioned by the European TV network Arte to create a feature film - her first in 30 years. Her response was a personal essay entitled Heart of a Dog, a work encompassing joy and heartbreak and remembering and forgetting, at the heart of which is a lament for her late beloved dog Lolabelle.

In addition to Anderson's inimitably thoughtful narration, Heart of a Dog includes musical excerpts from several of her pieces - "The Lake" and "Flow" from Homeland (2010), "Beautiful Pea Green Boat" from Bright Red (1994), "Rhumba Club" from Life on a String (2001), excerpts from Landfall (2011) with Kronos Quartet - as well as the film's closing song "Turning Time Around", written and performed by Anderson's late husband, Lou Reed.