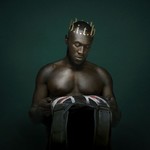 Stormzy
Heavy Is The Head

The 26-year old's rare blend of swagger, soulfulness and storytelling - reminiscent in several ways of Jay-Z - have him set for even greater international success, and he can already count Coldplay's Chris Martin and close friends Ed Sheeran and Adele among his many admirers.

Heavy Is The Head marks a hugely exciting return for the multi award-winning phenomenon and is a record which has been executively produced entirely by Stormzy himself; showcasing his world class lyricism and musicality alongside many of his celebrated and relatable subject matters.

The album also features additional vocals from some of the most exciting musicians of this generation - Aitch, Burna Boy, Ed Sheeran, Headie One, H.E.R., Tiana Major9 and YEBBA.