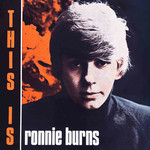 Inspired by The Beatles, and following their live performances in Australia in 1964, Ronnie Burns aged 18 quit his day job and plunged himself into the pop business. After an apprenticeship singing with beat-band The Flies, Ronnie then launched his solo career, signing with SPIN Records in 1966.

Ronnie became acquainted (and later good mates) with budding songwriters Barry, Maurice and Robin Gibb, who gave him four songs to record." Which Ronnie duly did in one session: 'Coalman', 'All The King's Horses', 'Exit Stage Right' and 'In The Morning'. 'Coalman', the Gibbs' answer to 'Taxman', was Ronnie's first top 10 hit.

Ronnie went on to have a highly successful career in music, appearing on TV shows such as Kommotion, Uptight, The Go!! Show and Happening '70. He was also regularly featured in the pop mag Go-Set, winning the readers' poll for favourite Australian male singer.

The best of Ronnie's 14 solo singles and three albums for SPIN, from beat-pop to social statement, are collected here on THIS IS RONNIE BURNS. Including more songs from the Gibbs, plus hit writers Terry Britten and Johnny Young.

Mastered from the original tapes held in the Warner archive, with sleeve notes by rock journalist Jeff Jenkins, and valuable input from Ronnie including archive images in the booklet.

In 2019 Ronnie performed on stage as part of the theatre tour hit The GO!! Show, and he will be back on stage in 2020, in a show that will surprise and delight all '60s pop fans.

Ronnie was also a successful TV show host in Australia, and will be appearing on TV in Australia as part of the promotion to support this release.

This anthology shows that Ronnie Burns recorded a fine body of work, a collection of timeless pop, which led to a career that endures to this day. He's rightly regarded as one of the pioneers of Australian pop.