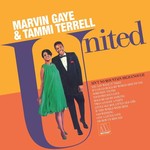 Limited vinyl LP repressing of this 1967 soul classic. Marvin Gaye and Tammi Terrell's first duet album, United features four huge hits: "Ain't No Mountain High Enough," "If I Could Build My Whole World Around You," "Your Precious Love" and "If This World Were Mine," alongside several B-sides and Motown album classics. Marvin helped to shape the sound of Motown in the 1960s, first as an in-house session player and later as a solo artist with a string of hits and duet recordings with Mary Wells, Kim Weston, and Tammi Terrell, later earning the titles Prince of Motown and Prince of Soul.

A1 Ain't No Mountain High Enough
A2 You Got What It Takes
A3 If I Could Build My Whole World Around You
A4 Somethin' Stupid
A5 Your Precious Love
A6 Hold Me Oh My Darling
B1 Two Can Have A Party
B2 Little Ole Boy, Little Ole Girl
B3 If This World Were Mine
B4 Sad Wedding
B5 Give A Little Love
B6 Oh How I'd Miss You