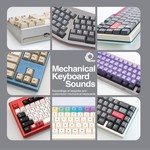 The recordings on this album are the first ever release of mechanical keyboard sounds.

They are from a selection of (enhanced) keyboards from the 80s, 90s and now. They were recorded by the master maker of the modern mechanical keyboard, Nathan from Taeha Types. He has a large following on Instagram, YouTube (videos of his hands typing on his keyboards hit 10K in just a couple of days after upload), and he now has over half a million views on his Twitch channel where he constructs keyboards live.